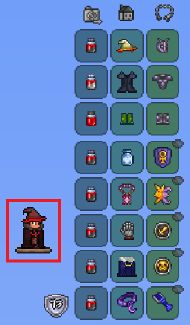 Farbstoffe (engl. dyes) are cosmetic items that can be placed in the Dye Slots of a player's inventory to alter the colors/textures of equipped armor, vanity items, and accessories. The Dye Trader NPC sells two dyes as well as the Dye Vat (50000*5). The other dyes must be crafted using the Dye Vat or obtained through trading in Strange Plants to the Dye Trader. Primary crafted dyes can be further combined to craft shade, gradient, and patterned dyes. There are currently 110 (

Dyes are not available on the

3DS-Version, due to the unavailability of pixel shaders.

All basic dyes are crafted at the Dye Vat. Their crafting ingredients (not including Silver Dye and Brown Dye) can be found growing as background objects in the natural world or are guaranteed drops from special enemies. All dye plants show on the map.

All colored basic dyes (except for black) can be combined with Silver Dye to craft Bright Dyes at the Dye Vat.

These dyes produce fade effects between multiple colors. They are crafted at the Dye Vat.

These dyes form patterns with multiple colors, applied as separate blocks depending on the shape of the item. All colored basic dyes, and some "flame" gradient dyes, can be combined with Black or Silver Dye to craft "<Color> and Black Dye" or "<Color> and Silver Dye", respectively. They are crafted at the Dye Vat.

These dye are given as quest rewards by the Dye Trader in exchange for Strange Plants. Dyes with a rarity level of Orange or Cyan can only be awarded in a Hardmode world.

These animated dyes are crafted using Lunar Fragments at the Dye Vat.